Celebrate Jerry's August 1st Birthday with the David Nelson Band!  The event supports the mission of the Jerry Garcia Foundation.
Please join us this August 1st to celebrate Jerry's 80th Birthday! Come dance to the exceptional music of the David Nelson Band at the Blue Note in beautiful Napa, California.  Tickets are available here: https://www.ticketweb.com/event/david-nelson-band-celebrates-jerry-blue-note-napa-tickets/12214025?pl=bnnapa

Birthday and Archive opening celebrations continue on August 4th with Mahali @ Garcia's located in the iconic Capitol Theatre. Supporting the mission of the Jerry Garcia Foundation.
Please come  join us on August 4th for  very  special acoustic evening of music and community with Mahali @ Garcia's located in the historic Capitol Theatre! Tickets are available here: https://www.thecapitoltheatre.com/events/detail/jerry-garcia-s-80th-birthday-celebration-with-music-by-mihali-g5vvz9u6pkv-b 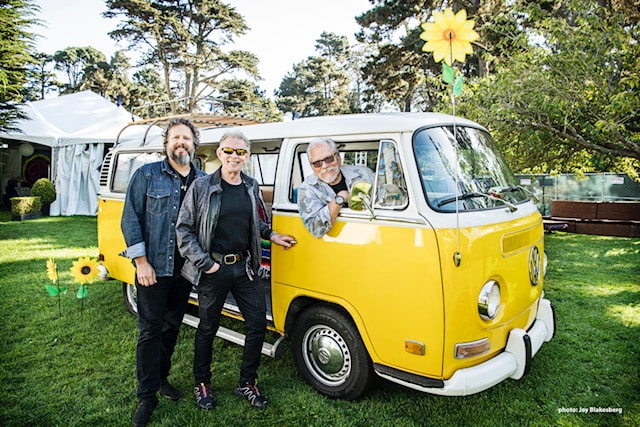 The "Imagine There's No Hunger" concert audience will be invited to participate in sing-along presentations of Lennon's Imagine, Give Peace a Chance, and the Grateful Dead's Ripple. This year's production will be presented at 7 PM (doors open at 6:30) on December 16th at the picturesque Viansa Sonoma Winery located in the San Francisco area. Door proceeds benefit WhyHunger.

Hot Tuna, Jorma Kaukonen and Jack Casady perform with a well-honed and solid power -– always in the groove derived from years of experience and mutual inspiration. What started as a side project during their Jefferson Airplane days, Hot Tuna's constant has always been Jorma Kaukonen and Jack Casady, the very definition of Hot Tuna. The two boyhood pals have never wavered in one of the most enduring friendships in Rock history. "Hot Tuna is a Psychedelic-Blues Institution" – Rolling Stone Magazine.

"The Jerry Garcia Foundation is honored to present the 'Imagine There's No Hunger' benefit concert to support the important humanitarian work of Yoko Ono Lennon and WhyHunger.  We are grateful to Hot Tuna, the Viansa Winery and to all that have extended their generosity on so many levels," said Keelin Garcia, Co- Founder of the Jerry Garcia Foundation.

"The Imagine spirit of generosity is a blessing and a gift to the greater community," added Manasha Garcia, Jerry Garcia Foundation Co-Founder.

The benefit's setting itself is where dreams are made. Located just north of San Francisco, Viansa Sonoma winery is situated on 33 acres of estate vineyards, 97 acres of natural wetlands with 270° views of the Sonoma Valley-San Pablo Bay, Mayacamas Mountains and "King's Highway." The beauty of the land pairs perfectly with the beauty of giving.
The visual art of Jerry Garcia will be on exhibit in the Grateful Friends Charity Village at the concert. All art proceeds benefit California Wildfire recovery efforts via the "Heart of the Vine" Foundation.

Ben & Jerry's® and Levi's® are sponsoring this year's holiday benefit. Levi's® has donated a sustainable Trucker Jacket inspired by Jerry Garcia's fine art. Proceeds from the Levi's® Truckers Jacket will benefit WhyHunger.
Rock poster artist Stanley Mouse has created a benefit poster for the art/music event. Mouse has produced art for both the Beatles and the Grateful Dead.

The "Imagine There's No Hunger" benefit will be streamed live around the world by Stage Trip Productions. Viewers of the free live stream are encouraged to donate directly to WhyHunger via their website:  whyhunger.org
"For it is in giving that we receive." -- Saint Francis of Assisi
#ImagineNoHunger #WhyHunger #PeacethroughMusic #StoriesofGratitude

WhyHunger is a leader in building the movement to end hunger and poverty by connecting people to nutritious, affordable food and by supporting grassroots solutions that inspire self-reliance and community empowerment. WhyHunger offers a clear vision and strategy to transform our collective food system into one that is socially and economically just, nourishes whole communities, cools the planet and ensures the rights of all people to food, land, water and sustainable livelihoods.
​
For more information, please visit whyhunger.org 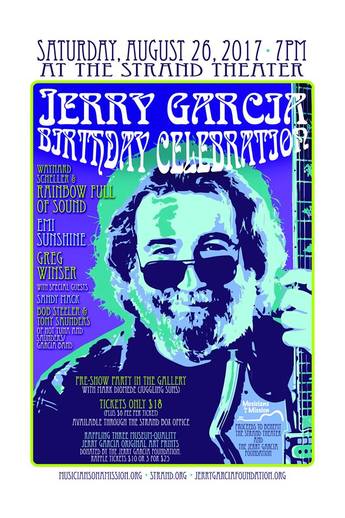 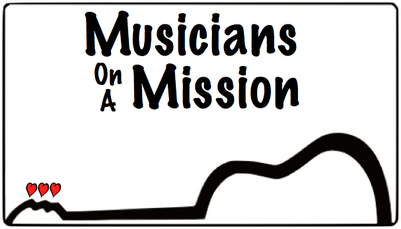 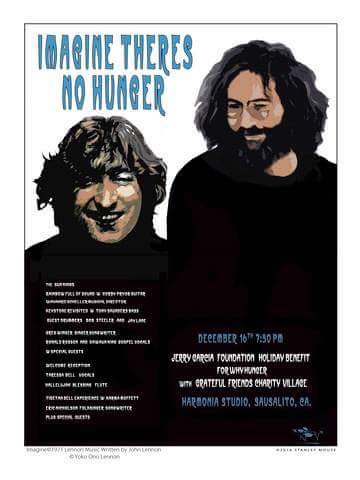 You are invited to join us via Live Stream for a Holiday Concert at the Harmonia Yoga Arts Studio on December 16th to benefit WhyHunger.

Inspired by John Lennon, Yoko Ono and the song, "Imagine," the "Imagine There's No Hunger" campaign endeavors to turn the dream of a world without hunger into a reality. The Jerry Garcia Foundation is donating a collection of Garcia's visual art to the WhyHunger organization. Select pieces will be on exhibit at Harmonia on the night of the concert as well. All proceeds generated from the concert and fine art will support the WhyHunger mission.

In addition, well-known rock poster artist, Stanley Mouse, has created a poster for the holiday benefit. Mouse has produced art for both the Beatles and the Grateful Dead.

The concert will be presented at Harmonia, located in the former Sausalito Record Plant recording studio. The Record Plant is legendary in the music world and the building has been minimally renovated to preserve its historic integrity. Countless luminaries have graced the studio's doors. In October 1972, John and Yoko attended the Record Plant's masquerade party opening celebration, dressed as trees.

A partial list of iconic artists that have recorded at the Record Plant include:
The Grateful Dead, Pharaoh Sanders, Jefferson Airplane, Aretha Franklin, Stevie Wonder
Bob Marley and the Wailers, Sly and the Family Stone, Van Morrison, Carlos Santana,
and the New Riders of the Purple Sage.

The Jerry Garcia Foundation has invited new talent and known artists to come together to perform in the historic space once again.

"We are grateful to the many artists sharing their gifts to support a peaceful world without hunger." Manasha Garcia, Co-Founder of the Jerry Garcia Foundation

*The Grateful Fiends Charity Village, an information sharing area designated for guest nonprofits will be featured in the Garden Room at the concert.

The following charities are participants:
WhyHunger,  Bread and Roses, Musicians on a Mission,  Psylodelic Gallery, Seva Foundation
Reverb, Alive Inside, Fender Music Foundation, 1% for the Planet, Reef Relief, Shimer College,
Playing for Change Foundation, and Save the Bay.
​
WhyHunger
WhyHunger is a leader in building the movement to end hunger and poverty by connecting people to nutritious, affordable food and by supporting grassroots solutions that inspire self-reliance and community empowerment. For more information, please visit whyhunger.org
The Art of Jerry Garcia will be on display at the Psylodelic Gallery at the Fur Peace Ranch Center for Art and Culture in Pomeroy, Ohio from April 7 through November 2016.
Learn More
The Jerry Garcia Foundation  Copyright ©2022 All Rights Reserved